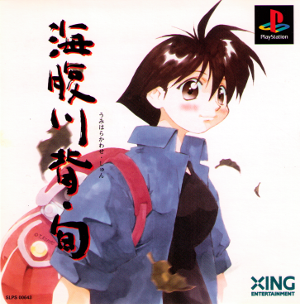 With the extra power of the PlayStation, the platforms in Umihara Kawase Shun have been made polygonal, although Kawase and all of the creatures she encounters are still sprites.

Umihara Kawase Shun has you start with eight extra lives, rather than the original game's ten lives. Again, more lives can be found within some of the fields, in the form of Kawase's pink backpack, and failure to reach a field's exit door after having collected a backpack will mean that backpack will not reappear.

As with all games in the series, replays of your runs through fields can be saved. The number of replays you can save is limited by the amount of memory card space you have. Replays from Umihara Kawase Shun can also be played back in Umihara Kawase Shun ~Second Edition~.

After certain fields, short animations will be played, showing Kawase advertising actual products. The various later re-releases of Shun remove this in-game advertising and replace it with artwork of Kawase.

Umihara Kawase Shun is the first release in the series to include a practice mode, where you can choose to play a certain field out of the ones you've played before, including fields you've reached in the main game mode but haven't yet cleared. This is useful if you want to get better at a particular field, whether you want to work out how to clear the field or get to a certain door, or just to get a better time. Since this is just a practice mode, though, clearing a field or a door you haven't cleared before will not unlock the field that door would lead to in the main game mode.

In 1997, in the months following the release of Umihara Kawase Shun, Japanese magazine TECH PlayStation included some Shun related content in its bonus discs.

The first copies of Umihara Kawase Shun to be sold included a bonus picture stand.