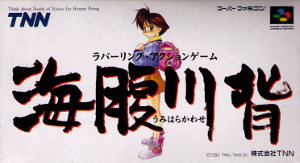 The first game in the series.

When you start Umihara Kawase, you will start with field 0. There are a total of 49 fields in Umihara Kawase, despite the highest numbered field being field 57 - there are in fact nine field numbers which are not used.

Fields in Umihara Kawase have a time limit, which is usually around four or five minutes, but can sometimes be different. If you haven't yet made it to an exit by the time you reach the time limit, you will lose a life and you will have to restart that field. Umihara Kawase also has a time limit on your overall playthrough, which is known as the '30 minute rule' - if you've taken 30 minutes since you started the game and you haven't yet reached an ending, after the next field you complete, you'll be led to a field which leads straight to an ending, rather than the field that door would normally lead to. The 30 minute timer can be shortened to five minutes by pressing the select button 100 times at the title screen.

In Umihara Kawase, you start with ten extra lives. There are 1-ups you will find in some of the fields, though, in the form of Kawase's pink backpack. These are sometimes found in hard to reach places, meaning you might have to decide whether the risk of losing a life is worth trying to gain an extra one. In addition, once you've collected the 1-up backpack, if you lose a life before completing the field, when you restart the field, the backpack will not reappear.

During play, the replay and options menus can be accessed by pressing start to pause, then pressing select - useful for saving a replay of a great run you just had through a field before you forget. This pause menu can also be used to exit to the title screen.

In November 2015, Umihara Kawase was released for Windows PC through Steam; it was removed from the Steam store on December 31st, following the closure of publisher Agatsuma Entertainment, but was re-released on 5th February, 2016, by new publisher Degica. This release builds on the Vita version by including online rankings for each door as well as each ending, accessible through practice mode. The practice mode field select screen also keeps track of the fields where you have collected a backpack. When playing in practice mode, you can easily retry the field you're playing on the pause screen and select menu.

Rather than having options for replays or any settings on the main menu, these are now sub-menu options of a new 'Menu' section. Within this section, in addition to replays and settings, you can view records of the total number of fields, doors and endings you've reached, the number of backpacks you've found, the number of types of enemies you've defeated, and your total time played.

New options added to the replay sub-menu allow you to upload saved replays to Steam Workshop for other players to subscribe and download, and watch other people's replays you've subscribed to. The settings include volume controls for music and sound effects, video options for fullscreen, width, size and filter, and options for your shot/jump button combination, language (English or Japanese) as well as your confirm button.

With thanks to Nicole and sol-alpha for contributions.