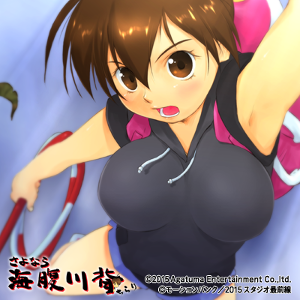 Known as Sayonara Umihara Kawase + in the west

In addition to having enhanced graphics, Chirari runs at 60 frames per second rather than Sayonara's 30. It includes ten new fields with five new backpacks, bringing the total number of fields to 60, number of field exit doors to 70 and number of backpacks to 45. Some previously existing fields have had minor adjustments, including the addition of enemies not in the original Sayonara, and field 34 has been completely revamped. It also has a new 'quick retry' feature.

Chirari includes the original Umihara Kawase, which for the first time includes a practice mode. Chirari is also compatible with PlayStation TV.

There is a bonus figure included with early purchases of physical copies of Chirari, which is available in limited quantities. In addition, there are certain retailer-exclusive pre-order bonuses: Amazon.co.jp is offering a cleaning cloth, while Sofmap and Trader are both offering a phone card, AmiAmi a mouse pad, Neowing a badge, WonderGOO a mini cushion, Takarajima and Animate a bromide, HMV.co.jp an A4 clear file folder, Imagine Web Shop a bookstore card and Seven Net a PC/phone wallpaper.

In the second half of March, there were preview events in Nagoya and Osaka, with a Tokyo preview held in April. People at these events had the opportunity to play Chirari before its release and receive a double-sided promotional poster.

With thanks to texh, Nicole and Nana for contributions.