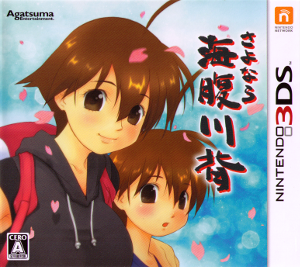 Sayonara Umihara Kawase changes the method of progression throughout the game compared to previous Umihara Kawase games: rather than automatically progress through the fields until you reach an ending or run out of lives, fields are selected to be played from a field select screen, so any unlocked field can be played at any time, without any limit on lives or time. The old method of play is still available as the unlockable Survival Challenge mode, however there are still no time limits in this mode.

Throughout the game, much like in the original Umihara Kawase and Umihara Kawase Shun, there are collectible pink backpacks - 40 in the 3DS version, and 45 in the Vita and PC versions. Due to the removal of the limit on lives, the backpacks are now used to unlock content. Backpacks are only officially counted as collected when you make it to a field exit, and once you have successfully collected a backpack, from then on, that backpack will be blue, rather than pink. In Survival Challenge mode, where you start with three extra lives, the backpacks do act as extra lives.

Sayonara on 3DS has a total of 50 fields and 60 field exit doors, and on Vita and PC has 60 fields and 70 field exit doors. However, unlike Umihara Kawase and Umihara Kawase Shun, Sayonara does not have any unused field numbers, with Sayonara's field numbers starting at field 0 and finishing at field 49 or 59 depending on the version. In another difference from the previous games, with the exception of one field, Sayonara does not feature any respawning creatures.

New to the series is the 'time stop' feature: the ability to freeze time for a few seconds, useful if you need to throw your fishing line in a certain direction and want to use the time stop to make sure you get it right.

Sayonara introduces new playable characters to the series. In addition to the now 20-year-old Umihara Kawase (known as Yumi in the North American 3DS version), you can also play as the child version of Kawase, as well as her childhood friend Emiko, and her future descendant Yokoyama Noko. These other playable characters have special abilities which may be useful to newer players: while playing as Emiko or child Kawase, you can restart once from a checkpoint in a field if you fail the field; whereas while playing as Noko, you can move in slow motion during time stop.

The field select screen shows arrows between fields, to show which fields a field's exit or exits lead. The arrows between fields are normally coloured blue, but your most recent Survival Challenge path will be coloured red. When choosing a field to play, your stats for the currently selected field will be displayed - your current best time to reach each exit door in the field, how many backpacks are in the field and whether you've collected them, and how many times you've cleared or failed the field.

When you press start at the field select screen, you will have the option to view your playing profile, your replays, a gallery of artwork and music, online rankings for the selected field, the game settings, or return to the title screen.

In the Profile section, information about your playing history will be displayed - your name, your currently selected character, your total number of fields cleared, endings reached, field exit doors found and backpacks collected, as well as the date and time you started the game, the time of your last save, and your total play time. You're also able to change your name and choose which character to play as. On the 3DS, your currently selected character will be shown on the top screen along with some information about them. These character bios are available as gallery unlockables in the Vita and PC versions.

In the Replay section, like every game in the series, you can save replays of your runs through fields, useful for if you have an amazing run through a field that you want to remember. In the Vita and PC versions, you can upload your replays for other players to download, and download other players' uploaded replays.

The Gallery has artwork of the characters, as well as a Jukebox section with music from the game. Much of this content must be unlocked.

In another first for the series, Sayonara features online rankings, so you can compare your times for each field and Survival Challenge mode endings with other players. The rankings are by region on 3DS, and global on Vita and PC. The game settings includes an option of whether to save your records when playing as Emiko or Noko, and this setting also controls whether you will see other players' records as Emiko or Noko in the online rankings. In the settings, you can also change the controls, choose whether to display tutorial information during the game, change the volume of the in-game music and sound effects, and choose whether to display during field play the clear timer, the current field number, the current time, which direction is being pressed on the d-pad or circle pad, or the backpacks you've collected.

As well as the above mentioned unlockable content in the gallery, there are unlockable outfits for Kawase - one of her Umihara Kawase outfit, and one of her Umihara Kawase Shun outfit. These outfits are selected through the character select in the profile section, and when playing a field as Kawase wearing one of these outfits, Sayonara arrangement versions of field music from their respective games will be played.

The first print run of Sayonara came with a bonus sound track CD. There were also six stores offering exclusive pre-order bonuses: Sofmap and Trader each offered a phone card, Animate and MediaLand each offered a bromide, AmiAmi a bookstore card and HMV.co.jp a badge.

Buyers of a physical copy of Sayonara who sent in a questionnaire included with Sayonara within three months of its release went into a draw to win a key holder.

The PC version was updated on 21st June, 2016, to support the HTC Vive headset and OpenVR, with a new 'diorama mode' which allows the player to see the game from a different viewpoint. On the same day, Degica and Kadokawa released an Umihara Kawase-themed graphic set for use with RPG Maker MV. This graphic set is available for free download from Steam.